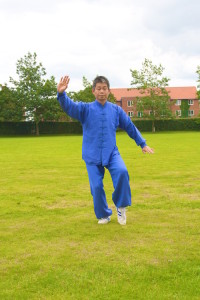 So what is Taijiquan 太極拳? To understand Taijiquan as a martial art we need to know what Taiji is and what Quan is.

“Tai 太” means “Big”. However in Chinese when we write big the character is 大. They look similar, but if you look carefully you will see that the first character has a small “dot” at the bottom. This is because this Tai has a different meaning to simply big, it also means very or too much, so we do not use this character when we want to write big. When Chinese writing was created in beginning, there were not so many words. Over long history however, this has developed and the writing has changed, the meanings have changed and characters cover more meanings as well. So in order to make sure a specific meaning and not get confused, sometimes the characters will add some side writing to be identified and related with certain things.

“Ji極” means “Limited “, it means “No more to go”. “Ji “ has two parts, the first part 木 means” Wood” and the other part 亟means “At The End”. It is also pronounced Ji and means limited. In the old days we just used the character亟 without the wood part on the left side, so basically they mean the same thing. This character亟 has three parts. The top part is a line, which is like a ceiling, just high enough over our head. The bottom part is like a flood, just under our feet, and the middle part is a person. So it shows a person has not got enough room, is limited. Now we even put a big piece of wood to block the exit that is really limited of space for a person.

Tai means big and Ji means limited. It means one part big, one part limited. The big part wants to expand and the limit wants to control the big. So we have two opposite energies, which we call Yin陰and Yang陽.