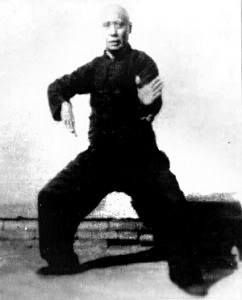 Chen Fa Ke 陳發科 went home to get the tools they need and then went to catch up with his cousin. As promised his cousin was waiting for him be walking slowly and so he quickly caught him back up and then they began their work. However, this even made Chen Fa Ke realise one thing. His cousin had walked slowly which enabled him to catch up, so if he applied the same thinking to his Taiji training he could also catch up. Of course, his cousin would not wait for him to reach the same level, so Chen Fa Ke would have to train double, triple or even more.

From then on Chen Fa Ke continued training with his cousin as usual, but he would also wake up in the middle of the night and early in the morning to practise his Taijiquan. As his cousin was looking after him, they shared the same room and so Chen Fa Ke had to be very quiet when he woke up and did his practise. He was too scared to go out in case he woke his cousin and so practised near his bed and any movements that made a noise he did gently.

Day after day, month after month and finally year after year he did this, every day from the age of 14 to the age of 17. He even trained during lunch times and afterwards when everyone else was resting.