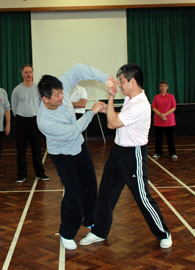 The second four are Cai採, Lie裂, Zhou肘, Kau靠. The first is Cai Jing採勁. “Cai” means “Pick up” and “Describes how you might pick a flower from a tree”. Of course, to pick the flower you have to break it off with your fingers, this is Cai. When we use Cai with power this is Cai Jing and this is also Qin Na 擒拿 and it is used to grab the opponent’s hands, arms, body and neck. During Tui Shou推手  we use Cai Jing to control to make them lose their power and also lose their balance. Cai Jing can be used to control the opponent and also to badly hurt them. Many times during Tui Shou two opponents will try Cai Jing together by grabbing each other’s hands.