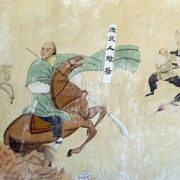 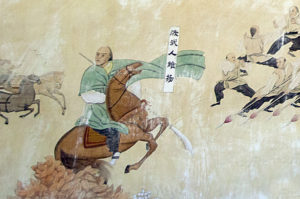 Seeing the arrows flying towards him, Chen Wang Ting 陳王廷 had no time to think. He swung his Guan Dao, spinning it in front of him, as fast as he could, covering himself and his horse! His arms were so powerful that he spun it so fast it made a “whoop, whoop” sound and created a strong wind. All the arrows where swept out of the air by his big sword!  Jiang Fa 蔣發 and the other bandits were so impressed by his Guan Dao skill and his powerful arms. They knew this was a very high level Kung Fu master. Then they heard Chen Wang Ting call it in a loud voice, which echoed of the mountains top, “My friends, my name is Chen Wang Ting, from Wen Xi, Huai Xing Fu (this would later be called Chenjiagou). I come here to pay m my respects your master Li Ji Yu 李際遇. I wish no disrespect or harm to anyone!

After that there was silence. Then Chen Wang Ting heard a cannon fire and then the gate of the big house began to open and a man around forty years old came out. He was followed by a group of bandits, Jiang Fa was one of them, and they paid their respects to him.