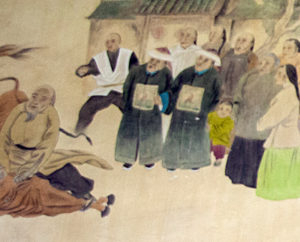 The rulers of China had changed and now it was led by a Qing 清 Emperor. The Qing Dynasty 清朝 were Manchurian 滿 from the North West and so now China was made up of Manchurians, Han 漢，

They killedd so many Han people and forced the men to shave the front part of their head but to keep the hair on the back in a long queue, a long braid. This was the Manchurian style of hair for men. Anyone who did not wear their hair like this was executed.

All these changes seriously affected Chen Wang Ting 陳王廷. For him it was like losing his parents or losing his home, but he knew he need to keep on living. He began to read many Daoist books in order to learn how to let go, to follow nature and understand everything happens for a reason.  His favourite Daoist book was Wang Ting Jing 黄庭經.