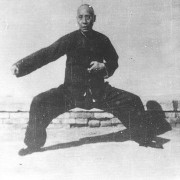 When the audience sat down to watch Chén Fā Kē they had never seen Chen Style Tàijíquán before and they expected it to be very gentle and slow. This was because they had all learnt Yáng Style Tàijíquán 楊式太極拳 from Yáng Lù Chán 楊露禪(1799-1872) grandson, Yáng Chéngfǔ 楊澄甫 (1883-1936). As Chén Style Tàijíquán is the oldest form of Tàijíquán, they all expected it to be even slower and they believed slow movements were the characteristics of Tàijíquán. Chén Fā Kē demonstration of the first form took about ten minutes, which meant they form was long, but they were surprised to see that the movements were faster than the Yáng Style Tàijíquán they knew, and that there was a lot of Fā Jìn發勁 – releasing power.