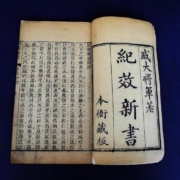 One of the main reasons Qī Jì Guāng 戚繼光 did so well was because he was supported by the Prime Minister of the Ming Government, Zhāng Jū Zhèng 張居正 (1525-1582). This helped Qī Jì Guāng earn his promotions. In 1582, Zhāng Jū Zhèng, passed away and some of the opponents of Zhāng, who did not like him, started to criticise Qī Jì Guāng. In the beginning their criticism had no effect on Qī Jì Guāng, but after three years, the Emperor took away Qī Jì Guāng’s position.

So, Qī Jì Guāng went back to his home, Dēng Zhōu 登州  – Dēng Prefecture in Shāndōng 山東. When he was there, people noticed that he was very poor and could not even pay for his medication. Some people suggested that the Emperor had used him, but the Emperoe refused. In 1598, Qī Jì Guāng passed away.

In 1560, , when Qī Jì Guāng was second in command with Tán Lùn 譚論, he wrote many books on military training and strategy. People still read his books today. Qī Jì Guāng was one of China’s greatest military men and high level martial artists. One of his books Quán Jīng Sān Shí Èr Shì 拳經三十二勢 – 32 Positions of Classical Fighting was used by Chén Wáng Tíng 陳王廷 when he was creating Tàijíquán 太極拳.