Although it is accepted to call it Taiji or even Tai Chi, the proper name of this skill is called Taijiquan (Tai Chi Chuan). Taijiquan literally means “Yin/Yang fist” . Taiji is the Chinese Pinyin spelling but the pronunciation sounds like “tie-jee”. 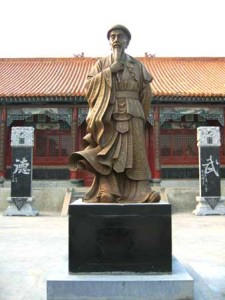 There are many different styles of Taijiquan and these are like branches of a tree. However, it is said that all Taiji developed from the Chen family, so this is the root of the Taijiquan tree.

The Chen family Taijiquan was originally developed as a martial art skill over 400 years ago by a man called Chen Wang Ting who lived in Chenjiagou, Henan Province, China. He was actually a famous warrior who lived at the end of the Ming Dynasty (1368-1644 A.D.). He fought against the government and was reputed to have defeated more than 1,000 bandits. However, when the Ming government was finally deposed by the Qing, he retired back to his village to become a scholar and develop his martial art skills.

Later Chen Wang Ting created the form Laojia (meaning Old Frame), using some movements from Qi Jiguang’s Long Fist form which can be found in the classic, “32 Forms of the Canon of Boxing” and combining it with principles of the Daoist scripture, “Wang Ting Jing” which was a manual on breathing. From these, he created the skill of Taijiquan by combining both movement with the Daoist principles of the Yin/Yang theory and that harmonising the breath and Qi. The Chen Taijiquan skill was passed down from generation to generation within the Chen village and continued to develop and more forms were created. Still, it was a closed skill only taught to Chen family members. It was only in the fifth generation of the Taijiquan skill that it was passed to anyone outside of Chenjiagou. This was to Yang Luchan (1799-1872) who was taught the skill by Chen Chang Xing (1771-1853). A monument to Yang Luchan and his sleeping quarters still survive in Chen Village today.

Chen Chang Xing made Yang Luchan promise not to open (teach) the more martial aspects of the Chen skill to the public. So when Yang Luchan went to Beijing, China, although he taught the Taijiquan he had learned, he left out the more martial aspects of the forms like stamping and Fajing (release power). He made the movements slower and used less spiral energy. Subsequent generations changed the skill even more. Many years later, when Chen Fake was invited to Beijing to demonstrate Chen Taijiquan, people did not believe that it was Taiji because it did not look like the forms they had been learning.
This brought up a lot of interest in the Chen Taijiquan. In the West, however, it was not until the 1990’s that the skill become widely and more readily available. Michael Tse said, “When I saw Chen Taijiquan demonstrated for the first time, I, too, did not believe it was Taiji. It was very attractive and I knew that I would like to learn more.” 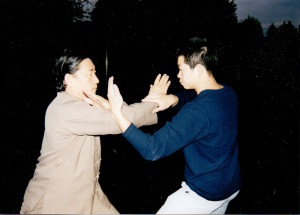 Grandmaster Chen Xiao Wang is the 19th generation inheritor of the Chen family Taijiquan skill. It is thanks to his dedication and devotion which has greatly aided the spread of the Chen skill from East to West. He is now famous throughout the world for his powerful Taijiquan skill. Michael Tse said, “Sifu is one of the most powerful men I have ever seen. Once in a Japanese television programme, they had over ten big men try to push him as he stood in a Chen style stance, calmly drinking a glass of water. No matter how hard they pushed, they could not budge him from his stance.”

“This is because he has trained himself beyond what most people would do. As a young man, he would practise Laojia not just once a day, but thirty times a day no matter how tired he was. Laojia is a very long form and to go through even twice is more than enough for most people. If he could not carry on, he would sit on a bench to rest and then wake up to begin training again. He trained more in one year than many would do in five or even ten years.” 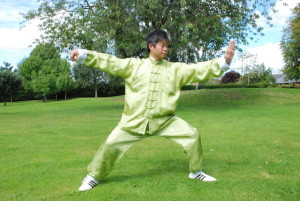 Many of you will have seen pictures of old Chinese people doing slow, gentle exercises in a park. The movements look nice, very gentle and relaxing and so this is your image of Taijiquan. It is true, that in the west and even throughout much of China, Taijiquan is widely known as an ancient health exercise. But if you look back into its history, you will find that Taiji had a very different beginning. Although it deals with health, it began as a means of self defence

There is no doubt that Taijiquan is very good for your health. This is because the first thing you need to do is relax when you begin your practise. You need to relax both your body and you mind and this is very beneficial to your health, especially in our very busy lives and world. After this you need to keep a good posture. When you have a good posture and are relaxed and your mind is calm, then your Qi can start to flow naturally around the body.

In total there are five main principles that will lead you to a good health and a high level of Taijiquan.

The Chen family ancestors also left 12 guidelines to help us not only reach a high level in Taijiquan, but to also help us become a better person whom others can respect and look up to.