One Movement After Another Movement, One Position Connects with Another Position上下相隨，內外相合 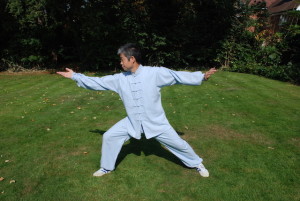 Chen Xin陳鑫 says in his book, “One Movement after another Movement, one position connects with another position.” This means when we do our form, we do not completely stop in the middle of it, when one movement finishes the next starts and so on, one after another. A long pause will result in us losing Qi. This is particularly important in Taijiquan as it is movement. Even when we have finished the form we can still feel the Qi moving inside, this is internal Kung Fu內家拳. It is the same as shaking a bottle of water, when you put it down, the water is still moving inside.

During our Taijiquan form we should not stop in the middle, we must keep the energy going and then we will feel good. Each set of movements or form we call Shi勢, like the 19 Movement we call 19 Shi十九勢. Movements or Shi like Jingang Pounds the Mortar金剛搗碓，Single Whip單鞭， have a beginning and an end, but each position should connect to each other. Between each one you can see a little pause, but inside the Qi is still moving. Therefore from one positon to the next position should be connected. This means Shi and Shi are connected. This is the same as saying movements and positions connect and should move continuously on to the next one, never stopping until we reach the end of the form.