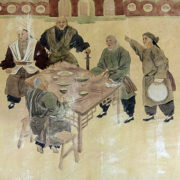 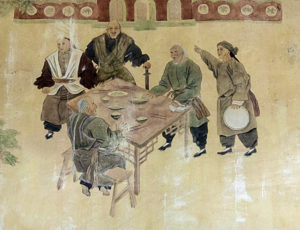 Jiang Fa’s 蔣發 Kung Fu was very good and he was very fast! While he was sitting on the beam, watching the others eating dinner, he saw the knife with a piece of meat shooting towards him. Just before it struck him, he calmly plucked it out of the air, opened his mouth and bit the piece of meat from the sharp point of the knife. As he bit, he broke the shape point of knife but kept in his mouth. Then, he quickly spat it out towards the pole and everyone’s surprise, it stuck right into the wood. Everyone could see how good Jiang Fa was and were very impressed but Chen Wang Ting 陳王廷 and the Old Man continued drinking. However, Chen Wang Ting was just pretending to eat and did not let anything pass his lips and go to his stomach. He was just being polite. Suddenly the Old Man said, “Please excuse me! I have something I need to do, but I will be back soon.” The Old Man still had not introduced himself to Chen Wang Ting and Jiang Fa. He kept his identity secret. As soon as he left the room around 20 men all armed with weapons went into the room and gathered around Chen Wang Ting. Jiang Fa knew there was going to be a fight and so he jumped down from the beam and stood next to Chen Wang Ting.