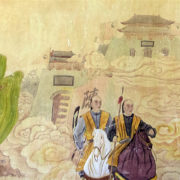 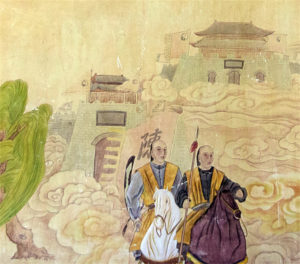 Xiong Rou Hu 熊若虎 laughed and said, “I am sorry he has left to return your buffalo. He is our close brother and also has good Kung Fu skill. He is the one who arranged all the tests you faced. You have actually met him he was the gentlemen you met on your way here. I am sure you will meet him sometime.” Chen Wang Ting 陳王廷 smiled and said, “That is good, we should meet up sometime!” During dinner they talked more and enjoyed their new friends company. This time even Jiang Fa 蔣發 could enjoy himself as last time he was worried about them being attacked. This was a good opportunity to meet others like themselves, who had the same heart and respect for Kung Fu and also who did not like the new government. Jiang Fa knew they would have some time to research and learn more about the styles Xiong Rou Hu and his men practised.

After a few more days, Chen Wang Ting and Jiang Fa said their goodbyes, but Xiong Rou Hu did not want them to go. However, he knew they had to and so he walked with them for three miles before finally saying goodbye to them.