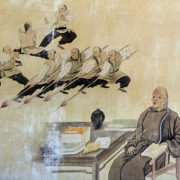 Chén Wáng Tíng 陳王廷 says in his poem, “Cover the head – block the face – this skill is ordinary 藏頭蓋面天下有, Strike the centre of the chest – hit the sides of the body – this skill is rare. 慣心剁脅世間稀. When we are attacked we will cover the area that is being hit. The most important part of the body is the head and face and so we will always cover them to stop them being hit. If we can block the attack then we can continue to fight. However, if we strike the centre of the chest then the fight will be over and hit the sides of the body we can cause a lot of damage as it is very painful. Chén Wáng Tíng finishes with, “A Sīfú 師父 who does not know the theory of these skills cannot judge who has a high or low level of Kung Fu. 教師不識此中理，難將武藝論高低.”

Chén Wáng Tíng wrote down all these fighting techniques and he wanted to combine all of them to create the best fighting skill. He also created contact training for two people and this is Tuī Shǒu推手 – Pushing Hands. He said that anyone who does not know these skills will not know what is high or low level Kung Fu. Chén Wáng Tíng was a great Kung Fu master. He took his high level Kung Fu skills and combined them with the teaching of the Huáng Tíng Jīng 黄庭經, with Daoist philosophy and Chinese medicine. He created a system, which is today one of the most popular health exercises and fighting arts. A lot of people have benefited a great deal from Chén Wáng Tíng’s Taijiquan.