Spelling and Pronunciation of Taiji 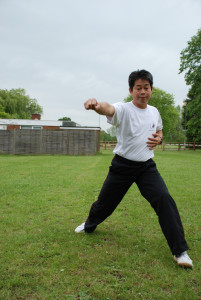 Taiji 太極 , most people will spell it Tai Chi and also pronounce it like this. Today, we should spell it Taiji because this is the correct way to say it. Even so, most people will still say Tai Chi because this is what they have got used to. When they hear people say it correctly they often do no understand what they are talking about, so in the west, we have to still say Tai Chi. The wrong thing used a lot, sometimes becomes right. You do not want to have to correct people all the time, so we are polite and accept it.

Most people do not understand what Taiji means. Often when we say Taiji, people in the West think it means old people performing slow movements in the morning, in parks in China, of course this is mostly Chinese people they think of practising in the parks. I am glad that today, since Chen Style Taiji陳式太極拳 has spread out around the world, there are some movies about Chen Taiji masters. These movies with their fight scenes have started to make people realise that Taijiquan is a fighting skill, a martial art, even many Chinese people do not do it as a martial art. If you do not know what it is how can you learn it and practise it properly?