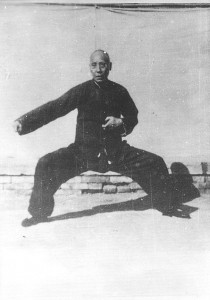 After 3 years Chen Fa Ke 陳發科 could practise his forms 30 times every day! Then one day he asked his cousin to Tui Shou with him. His cousin was very good, and was known in the village of pushing many people and even injuring them, some quite badly.

This time when Chen Fa Ke asked, his cousin could see that Chen Fa Ke had grown up and become stronger, so his cousin decided not to hold back any of his strength. They began to Tui Shou, but each time his cousin tried to push him, he could not move him. Then eventually Chen Fa Ke pushed his cousin to the floor! His cousin tried again, but still got pushed to the floor. It happened three time in a row! His cousin was very upset and shouted, “I always wondered how your family always reached a high level of Taijiquan! You must have some secrets! You are usually so weak and not as good as me and now suddenly you can beat me! I don’t think there is any point in my family training Taijiquan as you keep all the secrets to yourself!” His cousin walked out and never came back.

Chen Fa Ke felt bad. He wanted to tell his cousin that his father Chen Yan Xi 陳延熙, who although did have a very high level of Taijiquan had not been at home for many year and so he could not have learnt any secrets from him. It was just he had been training harder. He was not just having good skill even his lumb was gone, become healthy and strong young man.