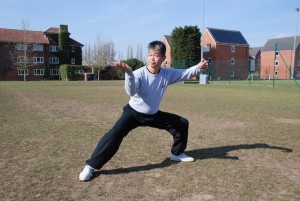 We should now understand that Chen Style Taijiquan movements consist of spiralling and circling movements that come from the Dantian. These kinds of movements are called Chan Si Jing纏絲勁.

However, did you know that there is another name for these kinds of movements and this is Chou Si Jing? This name comes from Wu Yu Xiang武禹襄, who was the founder of Wu Style Taijiquan. He studied from Yang Style Taijiquan with Yang Luchan楊露禪 and then later learnt from Chen Qing Ping陳清萍 in Zhao Bao Town趙堡鎮.

Wu Yu Xiang wrote a Taijiquan poem which says, “Movement energy is like Chou Si (Pulling Energy), preparing energy is like pulling a bow, releasing energy is like shooting the arrow. 運勁如抽絲，蓄勁如張弓，發勁如放箭”. This means that Taiji energy is like Chou Si. Whenever we do Chen Style Taijiquan all the spiralling movements are Chan Si. Chou Si means pulling energy. In ancient times a lady would us a machine to make silk clothes and would pull and release, and also open and close the silk with it. In Chen Taiji, when we perform the spiralling movements we pull the energy out, change direction, or speed it up. That is part of the Chou Si movement and with extra energy, it is also Chan Si Jing. So Taiji movement has Chan Si and also Chou Si, they are both the same thing.