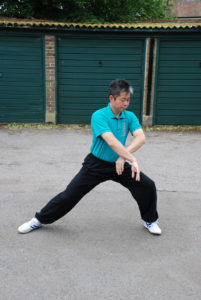 Back in 1984 I was a policeman in Hong Kong working as part as an emergency unit. There were five of us in the team and we drove around Hong Kong in a Land Rover or Jeep depending on the day. We worked together for about a year. The policeman who was our driver was very skilled, as you can imagine an emergency unit needs a very good driver, and so we are called him “Little Sifu”. Generally in Hong Kong we call any driver “Sifu” as he is always someone who knows a skill. A skill such as driving is quite normal, and of course we all know that the term Sifu is usually used to address somebody who is teaching Kung Fu.

After a few months all of us on the emergency unit got to know each other quite well. I got along with our driver very well and after talking with him I found out that he knew Chen Style Taijiquan. I was still learning Wing Chun with my Sifu, Ip Chun. So because of a martial arts background we got on very well. He also knew some Northern Shaolin skill.  The more we talked the more fascinated I became in Chen Style Taijiquan. At at that time I did not know anything about Taijiquan and did not know that there were different styles and that Chen style was the original. Its interesting spiral energy seemed very secretive.