The Story of the 25 Movem 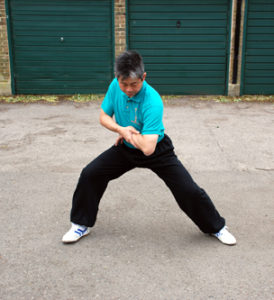 The driver’s surname was Fung. He told me that his teacher had learnt from the 17 Generation master of the Chen Family, Chen Fake陳發科. He told me many stories about Chen Fake.
One day we tried sparring together. I used my Wing Chun and he used his Taijiquan. I was 24 and he was in his late 30’s. When our hands contacted his hand immediately came to my face and he even put his fingers inside my mouth and pulled my mouth, which was very uncomfortable! This was very impressive! He said to me “This is Chan Si Jing纏絲勁” (spiral energy). Once it touches something it tangles up that person and does not stop until it has grasped that person’s centre of gravity and make them lose their balance.
I was so keen on Kung Fu, particularly any traditional Chinese skills that I was completely sucked into that spiral energy skill. We then spent a lot of time together. Mr Fung liked to drink beer and although I did not drink alcohol, I would go along and drink some soft drinks just to spend time with him to learn more about his Taijiquan.