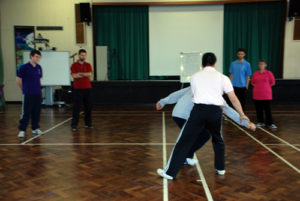 The second most important Jing is Liu Jing 履勁. In Taijiquan Liu means “Pulling Back”. In general the Chinese character Liu means “Conduct in a Job”, “Duty with Care” or “Sincere Attitude”.  So in Taijiquan the pulling back energy needs to be careful and correct when we do this. This means when we contact the opponents the energy is strong and coming towards us, we therefore do not use energy to oppose it, like Peng Jing 掤勁.  Instead, we let it come in and then we divert the energy down to the floor. So Liu Jing is pulling back in and directing downwards, but before we do this we need to read our opponent’s strength carefully and when we know their energy is coming towards us we can use Liu Jing  to make the opponent fall behind us.

Liu Jing’s energy comes from the hands, it means from outside and pulls back towards us, this means goes from the outside to inside. This also means we can control the way the opponent falls since this depends on how we change their energy and direction along the way. So for example,  we can use a little bit of Liu Jing  to make the opponent fall forwards and then suddenly change to Peng Jing to make them fall back. This is a more advanced level changing from one Jing to another.