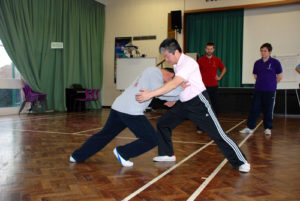 Of the Eight Jing 八勁, Peng Jing is number 1 and so it is the most important. If we can use it well then our Taijiquan has a good standard. Peng means expanding and Jing means power. The Eight Jing, ; Peng掤, Liu履, Ji擠, An按, Cai採, Lie裂, Zhou肘, Kau靠 are eight kind of energy or power and also applications. The first four Jing, Peng, Liu, Ji and are kinds of energy/power, which can be used in many ways. The second four Jing are more about applications using certain parts of the body, but also with energy/power.

Peng  is expanding so we can easily see its power for pushing. The energy releases from inside to outside and the power comes from the legs, moves to the waist, comes to the back and then finally to the hands. When somebody tries to push us, we can hold a position and so not lose our balance and this is Peng Jing.  it is like a balloon which is full of air which’s surface is very thick and not easily punctured.  This is Peng Jing. A skilled master can hold out his arm and when somebody tries to push it they can hold their position and also push back and make that person lose their balance.  This is an application of Peng Jing.