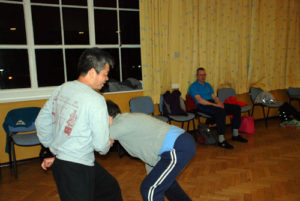 The poem Taijiquan by Wang Zong Yue王宗岳  talks about Peng掤, Liu履, Ji擠 and An按. It says, “Peng, Liu, Ji and An need to be practised seriously, using them to follow the opponent’s hands up to down, and down to up. Then the opponent cannot get in. Let them use all their strength and power to attack me. I just use 4 liang両 to push 1000 jin斤.Let the opponent come in and when they lose their balance I will attack immediately. Touching, connecting, sticking and following the opponent’s energy, never going against it. 掤履擠按須認真，上下相随人難侵。任他巨力來打，牽動四両撥千斤。引進落空合即出，粘連黐隨不丢頂。”

The poem means we must take Peng, Liu, Ji and An seriously and we must practise them diligently. During Tui Shou or fighting we must contact the opponent where ever they go. When they use power to attack us we just need to use a little energy to divert their power. The skill is to let their energy come in and we suddenly let go. Then they will lose their balance and this is the right moment to attack back. Then they will lose. So at first we must contact them gently and feel their energy and we must not use force against them.

a 両 liang is the old way Chinese people used to measure weight. 1 liang is 37.3g