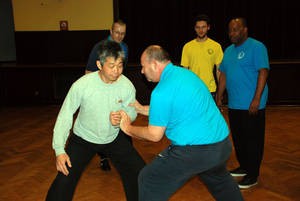 When we practise Taijiquan, whether it is Chen陳, Yang楊, Sun孫 or one the Wu 武,Wu吳 styles, we will see that they all follow the same principles. They follow the principles of the circle and the principles of Ying and Yang. All the movements come from the Dantian to create the circle and there are many different ways and kinds of circles we can make with the body. By practising these movements, we create eight kinds of power; Peng掤, Liu履, Ji擠, An按, Cai採, Lie裂, Zhou肘, Kau靠. These eight powers are used for attacking and defending. The first four powers are gentler and are for pushing and pulling, to make the opponent lose their balance, of course it will harm them as well.

During the first form, Yilu一路 we see more Peng, Liu, Ji and An. In the second form, Pao Chui砲捶, we see more Cai, Li, Zhou and Kou. These are more for breaking and damaging and so require more energy to practise them.

In the Taiji Poem it says, “We need to practise Peng, Liu, Ji, An seriously, then we can follow the opponent from up to down and from down to up. Then the opponent cannot get in. 掤履擠按須認真，上下相隨人難進”