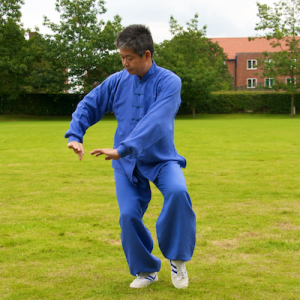 An Jing 按勁 is the fourth Jing. An means pressing down, like we press a button on the remote control or in a lift. The action is pressing down and also forwards, but it all depends on the situation. In Tui Shou when we are holding the opponent’s elbow and wrist with two hands our hands are separate, that is An Jing. This is different to Ji Jing where both our hands cross over each other. In An Jing our two hands are separate.  When we push it still involves Peng Jing 掤勁 because as I mentioned before any energy coming from the Inside to the outside is Peng Jing. However An Jing can also involve Liu Jing 履勁 where the energy comes from the outside to the inside for example when we pull an opponent arm with both our hands. Therefore An Jing can be pushing forwards with Peng Jing or pulling inwards with Liu Jing.  This means An Jing is very useful in both Tui Shou and fighting, the more we practice then the more we will be able to use it properly and also effortlessly.