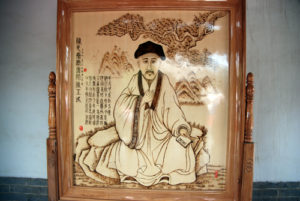 Chen Wang Ting 陳王廷 had initially wanted to help the Ming government fight against the Qing Army清 who wanted to overthrow the Ming Dynasty明. This was the reason he had entered the Imperial Examinations for martial arts. Now however, he had killed the corrupt examining official and now he had to flee and become a fugitive.

He thought to himself, “What should I do now?” I am a fugitive and this Ming government is no good!” Suddenly he recalled there was a rebel named, Li Ji Yu 李際遇. He was also a good martial artist and had passed the Imperial examinations, but due to corruption he had also left and eventually settled at Jade Belt Mountain (Yu Dai Shan) 玉帶山 in Deng Feng County 登封縣. Chen Wang Ting decided to go there and meet Li Ji Yu, and so he set off to ride ages red horse.

When he reached the Jade Belt Mountain, he rode up as high as he could until the road stopped. Suddenly he heard a voice singing a song. The song went,

“I live deep in the mountains. 老子生長在深山.

Even if Emperor Chong Zhen 崇湞皇帝 came to pass this road. 崇湞老兒從此過.

He has to pay the fee to pass through this road. 也得留下買路錢.”

On hearing this, Chen Wang Ting knew whoever was seeing the song was a robber who forced people to pay in order to pass through safely. Chen Wang Ting was not afraid I followed the voice back to the person who was singing the song.