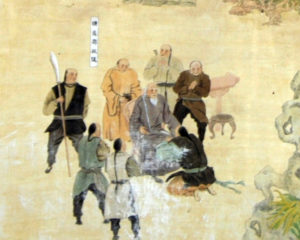 This man was the leader of the bandits. He was rebelling against the Ming Government whom were always sending armies against them. Yu Dai Shan was a very dangerous place, where it was easy to hide and was ready to defend. Everything three Ming army attacked they were defeated by Li Ji Yu’s L 李際遇 group, but this made the bandits very worry of strangers.

The man drew closer to Chen Wang Ting. Chen Wang Ting knew this must be Li Ji Yu and climbed down from his horse and approached him. Li Ji Yu said, “I have heard of your case. You are the one who killed the drummer at the Imperial Examinations! Such a hero! The government is so corrupt.” Chen Wang Ting was happy that Li Ji Yu already knew who he was, knew his situation and so knew why he had come there. Of course Chen Wang Ting wanted to join him and his rebellion against the Ming Government. Li Ji Yu introduced all the bandits to him, in particular Jiang Fa 蔣發. Li Ji Yu told him that Jiang Fa was a very fast runner and he always ran around Yu Dai Shan on the lookout for strangers. From then Chen Wang Ting stayed at Yu Dai Shan and joined the rebels to fight against the corrupt Ming Government.