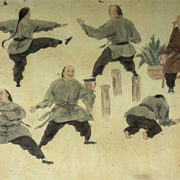 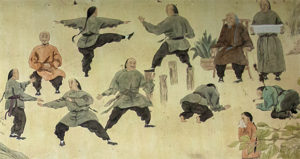 Chen Wang Ting 陳王廷 went back home. On returning to his Village, you went to visit many people, family, relatives, neighbours and friends. They all knew that the Ming Government 明朝 would soon fall since it was so corrupted. Many people in the village joined with Chen Wang Ting and he became the leader. He trained these people in his family Kung Fu style. He taught them how to use weapons like the Dao刀 (broadsword), the Jian劍 (sword), spear and even Da Dao大刀 ( big sword). In the daytime all the villages for farmers comma labourers and went about whatever job they had. However, that night time they all came together to train and prepare for the rebellion against the government. Chen Wang Ting prepared his people and waited for Li Ji Yu 李際遇 to make contact so then they could all go and join him in the fight. Chen Wang Ting waited and waited, and after 6 months there was still no word and nothing had happened. One day Chen Wang Ting went to the city in order to check things out and at the same time to buy some supplies for his family. There he met a merchant who had come from Deng Feng City 登封市, which was close to Yu Da Shan 玉帶山. The merchant told him that Li Ji Yu had been killed!