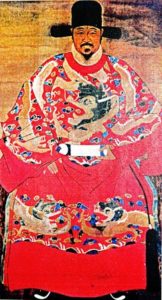 The more Chen Wang Ting 陳王廷 read the Huang Ting Jing 黄庭經 the more enjoyed it and the more fascinated he became by it. He was a Kung Fu man and he began to think about how he could combine his Kung Fu with the breathing techniques and principles of relaxation from the Huang Ting Jing. If he could, then his Kung Fu would be good for fighting and for health. He carried on practising his Kung Fu with relaxation and after many years he created five forms, 108 Chang Quan (Long Fist) —百零八長拳 which was a long form with 108 movements and one Cannon Fist Pao Chiu 砲捶.