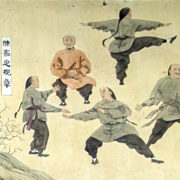 During the day Chen Wang Ting 陳王廷 worked in the fields, however at night he would teach members of Chen Jia Gou陳家溝(Chen Village) and the young people about Kung Fu. One day whilst Chen Wang Ting was out in the fields, one of his students suddenly ran up and said, “Uncle! There is a beggar in the village who is beating us!  You need to come and see!” On hearing this Chen Wang Ting was angry and thought, “Who dares to come here and cause trouble?” But then he wondered if it was a member of the Ming Army come to arrest him, then he thought, “The Ming Dynasty 明朝 has fallen and now the Qing Dynasty清朝 are the rulers. Things don’t work like that so it cannot be somebody here for me!” He followed his student to the village and could see fighting going on. One beggar was beating up many of the young men of the village. These young men were his students who studied Kung Fu with him. He watched the beggar and could see that the beggar had a very high level of Kung Fu and moved extremely quickly with a light body. Chen Wang Ting moved in and blocked the beggar’s attack. When he looked at the beggar he suddenly cried out, “Jiang Fa 蔣發!”