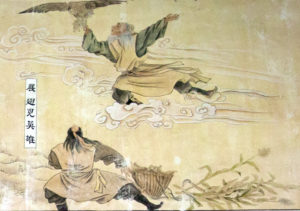 From then on Jiang Fa 蔣發 stayed with Chen Wang Ting 陳王廷. Whenever they met anyone, Chen Wang Ting told them that Jiang Fa worked for him and so people called him Jiang Ba Shi 蔣把式, Ba Shi 把式 is a very trusted and dependable employee. After a while, no one asked who he was anymore. However, Chen Wang Ting treated Jiang Fa like a brother, like family, particularly when there was no one else around. In the old times, in China, employees would not sit, eat or walk with their employer. They would always stand next to their employer, eat at a different table and walk behind them. Jiang Fa was very smart and he knew how to behave. He also liked helping Chen Wang Ting and picked up how to do all the jobs on the farm. He helped Chen Wang Ting a lot.