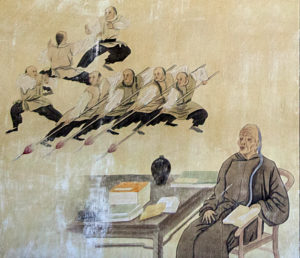 One evening, after dinner they were resting in the house and having a conversation about Chen Wang Ting’s creation – Taijiquan (it was not called Taijiquan at that time, it got this name much later after, I believe, it should be the time when Chen Chang Xing 陳長興 had taught Yang Lu Chan 楊露禪). Suddenly Jiang Fa picked up a dao 刀 (broadsword) chopped towards Chen Wang Ting was not prepared for this attack!