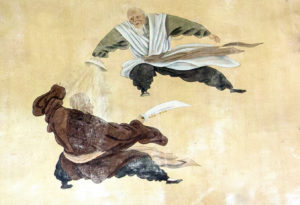 Although Chen Wang Ting 陳王廷 seemed to be unprepared, he had not expected that Jiang Fa蔣發 would attack him. When someone has a very high level of Kung Fu their sixth sense is very alert. It is always in the back of their head and they can sense things. This is because their Qi is strong and they can feel danger around them, just like animals can.

Chen Wang Ting felt the blade of the dao 刀 almost on him and he moved his body to just avoid it. He also felt that there was not enough space to use his hands to block the dao and also no room for him to pick up another weapon! So instead he jumped up against the wall and using the power of his hands and legs he clamped himself onto the wall. He was stuck on the wall so high up the Jiang Fa could not attack him! He stayed in that position as if he were a piece of iron sucked on to a magnet! This shocked Jiang Fa! He had heard people say, “With a high level of Kung Fu people can stick to a wall like a painting!” Now he could see it!

Jiang Fa dropped his dao, knelt down and asked Chen Wang Ting to accept him as his student.

Chen Wang Ting knew that Jiang Fa just wanted to test his level of Kung Fu. He also liked Jiang Fa and knew that he was a loyal person, plus he needed someone to pass this new skill on to. Chen Wang Ting dropped lightly to the ground, then  gently lifted Jiang Fa from his kneeling position and accepted him as his student.