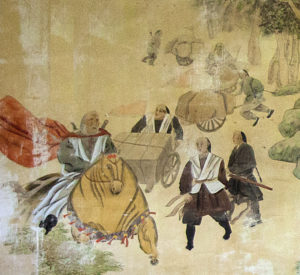 After five days they arrived in Shandong Province. On the road they met a merchant who said he was going home to Mu Men Zhai. Chen Wang Ting and Jiang Fa looked at each other and they also noticed how the merchant looked at them. Chen Wang Ting suspected that this merchant might be involved with the people who had stolen his buffalo. He smiled at the merchant and told him that they were going to visit a friend in Mu Men Zhai, but they did not know the way. He then asked if they could follow him to his village.  The merchant said they were most welcome to join him, and so they set off for Mu Men Zhai together. After some time they came across a small hotel where they could sleep and have dinner. They went inside Chen Wang Ting and Jiang Fa were surprised when the merchant knew the owner of the hotel.