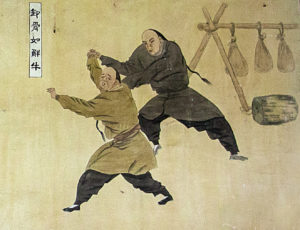 Jiang Fa 蔣發 saw Chen Wang Ting 陳王廷jump up and disappear through the skylight in the barn roof. He went outside and was surprised to see Chen Wang Ting already outside the door! He was impressed by Chen Wang Ting’s Qing (Light) Gong 輕功. Jiang Fa could also jump up through the skylight, but to carry the heavy bucket, which was carved out of stone should have been impossible! He already knew his Sifu was good, but to be able to do what Chen Wang Ting had just done was on another level! However, the thief had done the same, only carrying the buffalo and had also been silent. Animals usually make some noise, so to be able to pick it and jump up through to the roof silently was very unusual. The thief had a very high level and was fast, so he must be as good as Chen Wang Ting! Jiang Fa said, “Now we know how he did it!” Chen Wang Ting nodded and replied, “Yes, he did just what I did. Now the only question is, how do we get our buffalo back? Jiang Fa, stepped forward and raising his voice he said, “Sifu I do not want to be a nobody! Even if you do not want to get the buffalo back I am going, no matter how dangerous it is! I do not care!” Chen Wang Ting smiled, of course he would go as well because he wanted to know who this thief was and also wanted to see how good his Kung Fu was.