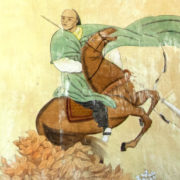 Chen Wang Ting 陳王廷 held hands together and respectfully greeted the old man. Although the old man, who was obviously the leader, had welcomed him, the gate was not open. The old man and his group stood on a high balcony. Above the gate there was a sign written in red which said “Mu Men Zhai 木門塞” and the calligraphy was very neat and stylish.  Chen Wang Ting knew he was being tested, the leader had not opened the gate, which was very high, because he wanted to see how good Chen Wang Ting Qing Gong 輕功(Light Gong) was. Chen Wang Ting could also feel everybody looking down at him.

Chen Wang Ting looked at Jiang Fa 蔣發 and the two men immediately understood and smiled at each other. Chen Wang Ting was on his beautiful red horse which was very powerful and sensitive. Master and horse had been together for a very long time and now the horse knew what Chen Wang Ting wanted almost without having to be told. Chen was holding his Big Sword and gave the signal and the horse knew exactly what to do. It ran as fast as it could straight at the gate and then the horse leapt high over the gate.  Next Jiang Fa also jumped over the gate. The old leader watched from his balcony and smiled but everybody else was looking at Chen Wang Ting with wide open mouths.