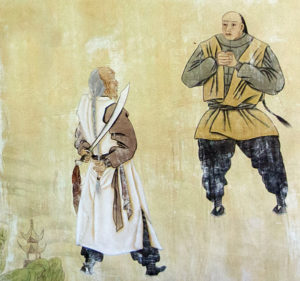 Chen Wang Ting 陳王廷 and Jiang Fa 蔣發 landed inside the Mu Men Zhai 木門塞, to the surprise of the people inside. Even the leader was surprised but he hid it behind his smile. He came down from the balcony and shook hands with Chen Wang Ting .  The leader then said, “I have heard of your name and your deeds, but now I can really see your talent and I am so impressed. Would you mind coming in and having some tea with us?”  Chen Wang Ting smiled in return and answered, “That was just a small trick, I hope I have not embarrassed myself. I would very much like some tea as we have been walking for a long time. Also my student must be very thirsty by now.”

The leader showed them inside the compound. There were many buildings all around it and after passing a garden they came to a wide big open space. Chen Wang Ting could imagine that this was a practice area. Finally they came to a large building at the back.  The leader opened the door and politely gestured them inside. Chen Wang Ting could see a very long corridor and he immediately knew this was another test he had to overcome.  He relaxed and brought up his Qi was in order to make his body light, then quickly entered, looking around to discover what the test was. Suddenly he saw an arrow shooting straight at him!