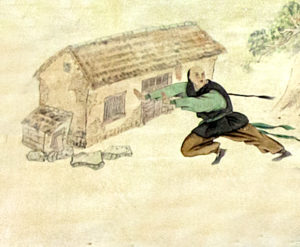 Chen Wang Ting’s 陳王廷 Kung Fu was very high level. Seeing the arrow shooting at him he immediately moved to the side and using his hand plucked the arrow out of the air! He knew the arrow head would also have some poison on it!  This was a serious test and he needed to show his level of Kung Fu to the leader and his gang. However, it was not just one arrow as now even more were shooting towards him! Chen Wang Ting ran straight at the other arrows and using the arrow that he had grabbed, hit the other arrows away before they could hit him.  Chen Wang Ting moved very fast and in no time he had reached the end of the corridor, but he could still hear more arrows flying down the corridor towards his original position. They had missed him. When he turned and looked back the whole wall all was covered in arrows and which looked like the spines of a hedgehog!  Chen Wang Ting relaxed and acted as though nothing had happened. This is the attitude of a high-level Kung Fu master.  Jiang Fa 蔣發, using his own Qing Gong 輕功, moved quickly to Chen Wang Ting ’s side. The leader and his gang were all very impressed. They had all heard of Chen Wang Ting ‘s high level of Kung Fu and now they had seen it!