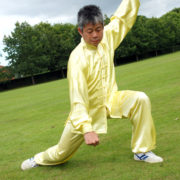 When we practise our forms some positions require us to move upwards, like in Laojia movement 19 – Punch Under Elbow 肘底捶, before we change to a fist, both hands are in a vertical, straight line. In this movement we are in the highest position, which trains our body to stretch upwards as much as possible. It is the same as movement 55 – Roster Stands on One Leg 金雞獨立. In Tàijíquán we do not always stretch the body to the extreme, so when we are doing the form, we should do that. Then, when we move upwards we are in a higher position. It is the same when we move downwards. When we are in a low position, like in movement 33 – Immortal One Catch 神仙—把抓, we can go down as low as possible. It is the same in movement 16 – Moving Both Sides with the Fist 撇身捶, we can go as low as we can. My Sīgōng 師公 Chén Zhào Kuí 陳照奎 in that position is a very low position, his left leg is almost straight and his right leg is bent all the way. This means training covers high positions, low positions and making the joints more flexible. So, when we use the body, we can go higher and lower. Imagine, if we want to push our opponent and the higher position is better, then we can easily do so, and, if the lower position is better, then we can do that too.