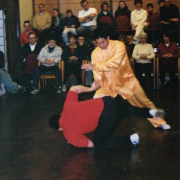 Wáng Zōng Yuè’s Tàijíquán Poem 王宗岳太極拳論 says, “ 進之則愈長，退之則愈促 When we move forward – we can go further away. When we move backward, we should be able to move quickly.”