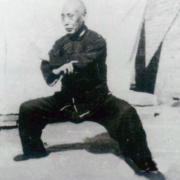 None of the audience could believe what they were watching was Tàijíquán太極拳. Some of them had heard there was also a form called Pào Chuí 砲捶 and when Grandmaster Chén Fā Kē had finished his performance, they asked him if he could demonstrate it as well. Since they were all students of Yáng Style Tàijíquán 楊式太極拳, they had heard of Pào Chuí but had never seen it, however they knew it was a powerful form. Grandmaster Chén Fā Kē began to demonstrate it and the first few movements were the same as the Yīlù —路 – first form, however, once Grandmaster Chén Fā Kē reached Dān Biān 單鞭 – Single Whip, his movements suddenly exploded with power and his stamping shook the floor, even breaking some of the floor tiles! He also moved very quickly, lightly, jumped high and leapt a long way. The entire audience were surprised and shocked! None of them knew that Tàijíquán could be like this. However, as Shěn Jiā Zhēn 沈家桢 and Xǔ Yǔ Shēng 許禹生 watched in amazement, they both realised they were witnessing a very high level of skill that contained powerful internal energy and it would take over 20 years to reach this level. They were so impressed that they immediately went to study with Grandmaster Chén Fā Kē