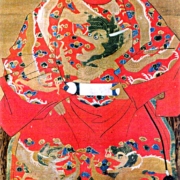 Chén Wáng Tíng 陳王廷, the founder of Chén Style Tàijíquán 陳式太極拳, loved Kung Fu and Daoism, and so he combined the physical skill with the Daoist principles and philosophy to create Tàijíquán. He used his family Kung Fu (Gōngfū) 功夫 and other styles of Kung Fu, in particular the Kung Fu style of the Míng Dynasty 明朝 general, General Qī Jì Guāng 戚繼光 (1528 -1588).

Qī Ji Guāng 戚繼光 became famous during the Míng Dynasty (1271-1368), one of his most famous acts was defeating the Wōkòu 倭寇 – Japanese Pirates or Dwarf Pirates who raided the Chinese and Korean coastline from the 13th to the 16 Centuries, the time of the Míng Dynasty. For 300 years they raided property and killed many civilians and Ming soldiers. Many Míng armies and some famous generals were defeated by them, until a young gerenal named Qī Jì Guāng defeated all the Wōkòu. After that no Wōkòu dared to come and attack China and once they heard the name Qī Jì Guāng they all fled in fear.