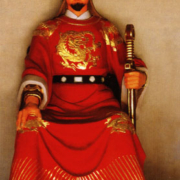 Qī Jì Guāng 戚繼光 was born on the 12 November 1528 and died on the 17 January 1588. He was born in Shāndōng Shěng 山東省 -Shāndōng Province in Dēng Zhōu 登州. For six generations, from his Great Grandfather his family had been in the army. His Great Grandfather had followed the first Míng Emperor Zhū Yuán Zhāng 朱元璋 (1328-1398) and helped in defeating the Mongolian Empire, which was the Yuáncháo 元朝 – Yuán Dynasty (1271 – 1368). The Yuán Dynasty was the time of the Mongolian Genghis Khan who conquered Central Europe, the Middle East, Russia and China. Qī Jìguāng inherited his family’s position as commander of one of Shāndōng Dēng Zhōu’s military groups after his father passed away. In the past in China, if your father earnt a high position in the government, the position was passed down to the children and their offspring who inherited the position, any land and property. So Qī Jìguāng became the commander, he also studied war strategies like Sūn Zi Bīng  Fǎ  孫子兵法 – Sūn Zi’s Art of War and many others, and was sometimes sent to Běijīng 北京 to help protect China’s boarder.

In 1549, Qī Jìguāng took the Wǔ Jǔ 武舉 – Imperial Military Examination and passed. This exam was for people who worked in the military. It was created by the leader of the country to find talented citizens who could come forward to help the country. The first record of the examinations was from the Xià Cháo – 夏朝 – Xia Dynasty in 115 BC, so China created the examination before anywhere in the world.