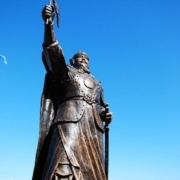 The next Wǔ Jǔ 武舉 – Imperial Miliary Exam that Qī Jìguāng 戚繼光 took was in Běijīng 北京 , and this was the final one. Unfortunately Qī Jìguāng failed. However, at that time, the Mongolians were invading China from the north and Běijīng was in danger. Qī Jìguāng was called up to help defend the capital and so he drew up a military plan, which he presented to the Emperor. His plan had the support of many generals and officials. It was decided to use Qī Jìguāng plan and at the end, the Mongolians were defeated and retreated, and so they did not get close to the capital.