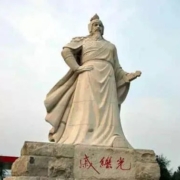 Commander Tán Lún 譚綸 liked Qī Jì Guāng 戚繼光 a lot. He found him to be very brave, smart, loyal and always had new ideas on military strategy and even created new ways to attack and defend. In 1557, Commander Tán Lún and Qī Jì Guāng recruited 3000 soldiers. In 1558, Qī Jì Guāng led a mission against a group of bandits, but he was unsuccessful. The defeat made him think a lot. Many of the soldiers he had recruited were no good, particularly those that had come from cities. After this he decided to only recruit from farmers or people from the countryside. At the end, after winning many battles, his name being well known and his army being called the Qī Family Army, Qī Jì Guāng found that people from the cities were cunning and tricky. Some of them were very weak, not strong enough to fight and had their eyes on other things, they were never focused on their job. Some were only looking to take whatever could benefit them. This meant during a battle they would escape the fighting and this cost the lives of the other soldiers.