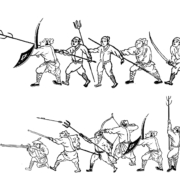 Qī Jì Guāng’s 戚繼光, Qī Jiā Jūn 戚家軍 –  Qī Family Army was very organised. It had rules and a system that everything was based on. All the soldiers were paid, and this was the first professional army. This was important because all the soldiers were farmers. They were so poor and so they could earn some decent money joining the Qī Family Army, if they killed one enemy they would receive three time of the money they had earned and this was very encouraging. Everything in the Qī Family Army was clear, from the weapons different soldiers used to the positions they took. Even the drums that were beaten in battle played a different rhythm and tune telling the soldiers whether they were attacking, defending, or even retreating. Flags of different colours were waved in different positions to signal what situation they were in.

Qī Jì Guāng created a battle group called the Yuān Yāng Zhèn 鴛鴦陣- Mandarin Duck Position, Yuan Yang 鴛鴦 are a pair of birds, who are mates  for life, it means the group of soldiers are bonded together like the Yuan Yang Birds, the team also had unusual weapons like a pair of wings, those also like tree branch, which was created particularly for fighting the Wōkòu 倭寇. In this position, the front two soldiers had swords and shield, and behind them was a soldier with a long spear. To each side was a soldier holding a device that looked like a pair of wings or branch of a tree made of metal. The branch was made out of lots of curved metal blades which stuck out at different angles, and these could knock an enemy’s weapon from his hands and then attack him in many different ways. The Yuān Yāng Position would surprise anyone who tried to attack it.