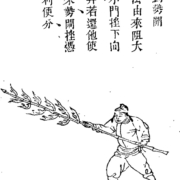 Not only was the Yuān Yāng Position 鴛鴦陣 armed with a long spear and the branch weapon, which would confuse the enemy, there were also soldiers inside who were armed with shot guns! These were old fashioned guns compared to what we know today, they were tubes in which the soldiers poured gun powder and a metal shot, but they could still shoot over a long distance. In all, the Yuān Yāng Position had about seven soldiers in it, and they covered all directions, short swords, long swords, shields, spears, metal branches and shot guns. The Yuān Yāng Position could handle 10 to 20 enemies and it became a very well-known position at the time.

Qī Jì Guāng 戚繼光 also made the team of each Yuān Yāng Position train together, eat together, sleep together and so they were together all of the time. This made them all bond together very strongly like Yuan Yang Birds鴛鴦. Later Qi Ji Guang also created some other Positions for battle, they were also very successful.

The rules Qī Jì Guāng draw up were very strict and rewards and punishment were very clear. No member of the team could leave without the team leader knowing. The punishment for this was cutting off an ear! During a battle, if one member of the team tried to run away in the battle, who would be executed. If the whole team tried avoiding a battle or tried to retreat without permission, then the team leader was executed. However, since all the soldiers were from poor families or farmers all, from the poor areas, they were very loyal and brave.