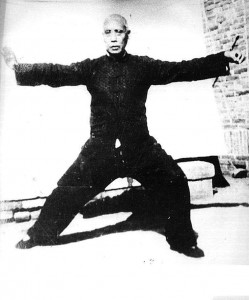 My Tai Sigong, Grandmaster Chen Fa Ke 陳發科 reached a very high level of skill. However, when he was a 14 year old, he was ill and weak and felt lump inside his body. Since he was so weak, he needed someone to look after him and so his family found a cousin, who was strong and very good at Taijiquan, to look after him. In the family people were worried about him because his Grand Grand father Chen Chang Xing陳長興, Grand Father Chen Geng Yun陳耕耘 and Father Chen Yan Xi陳廷熙 had a very high level of TaijiQuan. It looked like up to him the skill would be over, this affected Chen Fa Ke a lot.

In Chenjiagou 陳家溝, Chen Village, virtually everyone was a farmer and so the people had to go to the fields to work on their crops. Even though Chen Fa Ke was still a child, he also had to work in the fields with his cousin and everyone else. This was their daily life, farming and practising Taijiquan. Of course, due to his poor health, Chen Fa Ke’s cousin was much better at Taijiquan than he was. His cousin was also bigger and stronger than him and so when they practise Tui Shou推手– Push Hands he would always lose to his cousin and in fact all the other youngsters in the village would be pushed away by him or beaten if they fought him, some even got injuried.

Once Chen Fa Ke and his cousin were on their way to the fields, when they realised they had forgotten a tool which they need for work. He told Chen Fa Ke to run back quickly and get it and he would walk slowly and wait for him to catch him back up. So Chen Fa Ke went back home very fast to fetch the too.