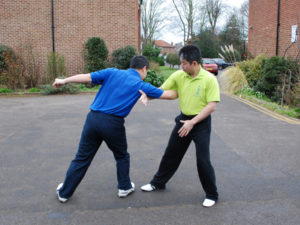 Chan Si Jing is very powerful. The spiral movement can tie up an opponent at any part of their body. This is a high level of Chan Si Jing. I was completely sucked in. Master Fung also showed me how to use Chan Si Jing to counter Chan Si Jing. He asked me to twist his arm behind his back, so I used two hands to grab his right arm and twist it behind his back with a lot of force. He asked me, “Are you ready?” and I replied, “Yes!” He just moved his shoulder and his waist and his arm came right out, at the same grabbed though my armpit and over my shoulder and suddenly I was on the floor! That was completely amazing! At the time I did not know how he did it. I held him very tightly and he just spiralled his waist and shoulder and then his arm came out, even using Chan Si Jing to grab my body and throw me to the floor! That was a skill I had never come across and I wanted to learn. I wanted to learn and get to the bottom of that skill!