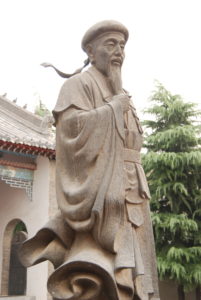 On hearing the loud voice Chen Wang Ting 陳王廷 looked to the top of the mountain in the direction where it came from. Chen Wang Ting’s eyesight was very good and he could make out a person standing on the mountainside. He instantly recognised him as the woodcutter who had spoken to him before. Now it seemed he had become the leader of a group of bandits. At that time there were about 30 bandits everywhere in the countryside and this was because the Ming government was very corrupt and so the country was very chaotic. This is what led the overthrow of the Ming Dynasty.

As he watched he saw all the bandits running down the mountain, coming to attack him. They suspected that he was a spy for the Ming Government who had come to check them out, and they were afraid that he had soldiers hidden away who were coming to arrest them. Chen Wang Ting see that they were heavily armed with swords, spears and bows and arrows. Chen Wang Ting kept himself calm and called out in a loud voice, “Hold on! I do not come to harm you, I am just looking for someone.” To the leader he called, “May I ask what your name is?”  As the Woodcutter drew closer to him he said, “I am Jiang Fa 蔣發! But I don’t think your Ming Government will know my name!” And at the same time he raised his sword and brought it down towards Chen Wang Ting!