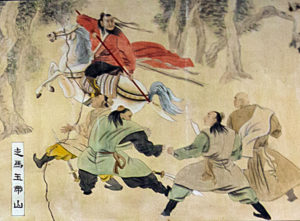 Each time a bandit got close and attacked, Chen Wang Ting disarmed him, knocking his weapon flying to the ground! This surprised everyone and Jiang Fa 蔣發 realised that this person had very high level Kung Fu skill and they could not defeat him. Jiang Fa called out, “Retreat!”. Immediately all the bandits followed his order and ran back up the mountainside. Chen Wang Ting thought, “I still need to find Li Ji Yu 李際遇.” And so he followed after the bandits.  However the bandits were very quick and it was as if they had suddenly disappeared!  Luckily Chen Wang Ting’s horse was quicker and he was able to follow their tracks.

As he rode higher, Chen Wang Ting saw a big house near the top of the mountain. He knew that if he had not been able to follow the bandits he would never have found this place as it was so well hidden.

The house was a simple building, made from dark coloured wood which matched the trees surrounding it and hiding it. As Chen Wang Ting drew closer he noticed how quiet everything was and he wondered whether there were people hiding inside the building. He approached very carefully when suddenly someone shouted, “Shoot!” And a rain of arrows flew down towards Chen Wang Ting and his horse!