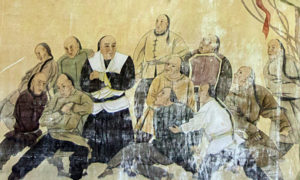 Whilst Chen Wang Ting 陳王廷 was lying in his sick bed, the Ming Government suffered a big change. The rebels of Chuang Wang 闖王 (The King of Breaking Thought) Li Zi Cheng 李自成 broke into the Forbidden City 紫禁城 and took over the capital. The Ming Government was over, and the last emperor of the Ming Dynasty, Song Zhen 崇禎, hung himself on Mei Shan 梅山, which was behind the Forbidden City. In Beijing Li Zi Cheng held many government officials and members of the royal family hostage. In particular he held a beautiful lady, Chen Yuan Yuan陳圓圓 captive. She was the concubine of General Wu San Gui 吴三桂 of the Shan Hai Guan 山海關 (Mountain Sea Gate). General Wu asked Li Zi Cheng to release Chen Yuan Yuan, but Li refused, as Shan Hai Guan was such an important gate since it kept out the Qing Army 清兵 that wanted to invade Beijing. General Wu San Gui was extremely angry, so he made a deal with Qing Amy ,left Qing Amy into Shan Hai Guan to help him to retrieve hi concubine Chen Yuan Yuan. This allowed the Qing Army into Beijing. Once inside the Qing Army defeated Li Zi Cheng and then went on conquer the whole of China, and so the Qing Dynasty 清朝 began and everything changed in China.

All this happened whilst Chen Wang Ting was lying in his sick bed slowly recovering from his illness. By the time he had fully recovered from sickness the government had changed and the country was now ruled by the Qing Dynasty